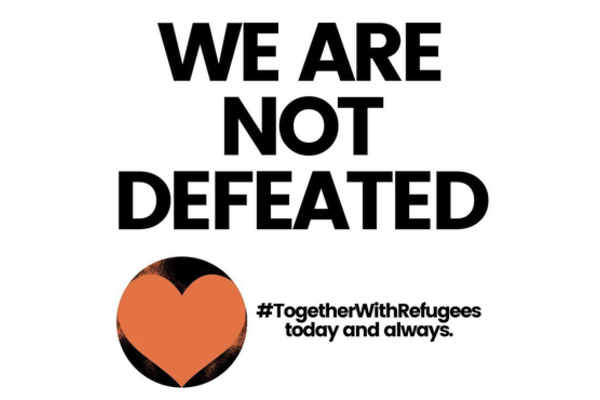 We are not defeated.

This week, the anti refugee bill was passed into law. But we are not defeated.
29 Apr 2022

This week, the Nationality and Borders Bill was passed into law. Over the last 9 months, we have seen countless people and organisations speaking out against the many injustices in the Bill and the House of Lords presented a strong challenge to the Bill, right up to the 11th hour. Sadly it wasn't enough to prevent the inhumane, unjust Bill becoming legislation.

The passing of the Bill means that thousands of people who have fled war and persecution will be left without the opportunity to find sanctuary in the UK. We believe that the lives of countless men, women and children will be put at further risk, because of this legislation.

What's wrong with the Bill?

Over the last year, we've shared many of our concerns regarding the Bill (see here, here and here, for example).

The UNHCR, the United Nations body which is dedicated to upholding the rights of refugees, have said that the Bill is incompatible with the 1951 Refugee Convention. The Bill will criminalise people who have committed no crime, and there is simply no evidence to suggest that these new laws will reduce the risks facing people who have no choice but to pay people traffickers or smugglers in order to find safety.

The Bill introduces a 'two tier' system, which means that how you arrive in the UK becomes more important than why you have had to flee your home country. Despite the fact that new visa schemes for people fleeing Afghanistan and Ukraine have been far from successful, the Bill means that anyone who doesn't arrive on one of these formal schemes will face imprisonment here in new warehouse style 'reception' centres and even the possibility of being sent to Rwanda to claim asylum there.

We are disheartened. We are frustrated. And we are angry. And importantly, we need to recognise how much harder and frightening this is for friends, colleagues and clients who are already here in the UK having fled for their lives. What does this new legislation say to them about our country?

But in the midst of the despair, we have hope.

As a faith based organisation, hope is important to us and a fundamental part of our ethos and our approach to our work. The hope we hold onto isn't just a vague concept though. It finds its home in concrete evidence and opportunities that we can see ahead of us. In the book Active Hope, authors Joanne Macy and Chris Johnson remind us that 'active hope' is not wishful thinking, or waiting to be rescued. Rather it's a journey where we must honour the pain and sorrow we may experience, in order to be able to see things with new eyes, to recognise the power we have, and then move forward together with hope into action.

So what does active hope look like for us now? We can see that the government approach and attitude through this whole process seems to directly counter public opinion which is good news. Our friends at GMIAU wrote a blog highlighting just some of the reasons we have for hope that this is not the end of the road:

Although the Bill has been passed into law, much of the detail remains unclear and this is where opportunity lies.

There will be chances to speak out against elements of the Bill's implementation on a local and national level, for example like in Linton-on-Ouse in Yorkshire, where the Home Office wanted to open a huge reception centre with no consultation or consideration as to the needs of people who would be placed there.

There will no doubt be legal challenges ahead, like the one which has already been launched - and essentially won- against the Home Office and it's plan to push back small boats in the English Channel. We can support these challenges by adding our voices to petitions, directly contacting decision makers and people who hold power and, where necessary and possible, by supporting legal actions financially.

We will continue to use our voice through this website, our newsletters and social media to share different ways that you can get involved in speaking out in support of people who are seeking sanctuary. For starters why not write (again!) to your MP? If they voted against the Bill, why not thank them. If they voted in favour of the new legislation, write and express your sorrow and concern. You can find contact details for your MP and also learn how they voted here.

Thank you for reading this far and for standing with us as we continue to speak out with and for people seeking sanctuary. We are not defeated.