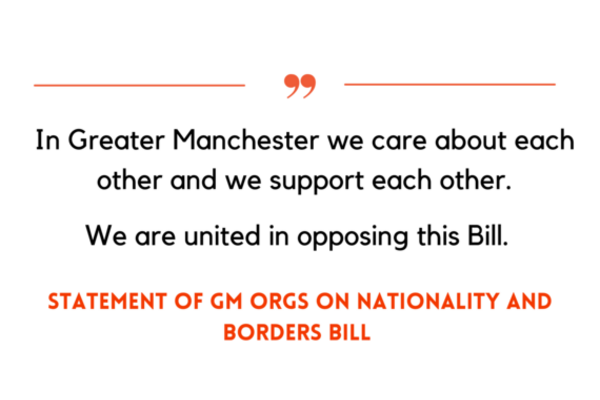 Today, 56 organisations and groups across Greater Manchester have come together to oppose the Government’s cruel and divisive #AntiRefugeeBill.
2 Dec 2021

In Greater Manchester we look after our neighbours, we care about each other, and we
support each other.

We know that our boroughs are strengthened by people seeking safety, because we see this every day. As members and representatives of voluntary community arts and faith groups, and organisations across Greater Manchester, we spend our days inspired by those we work with. Our welcome in Greater Manchester for people fleeing the horrific situation in Afghanistan is the latest of our welcomes. The outpouring of support for our new neighbours, who have fled for their lives with courage and dignity, has shown what we’re made of: supporting each other is who we are.

That is why we have to speak out against the Government’s proposals to rewrite the asylum system, and the consequences they will have for refugees and in our communities. In a few months’ time, some people seeking sanctuary will reach the UK, after a frightening journey. They will come from countries suffering terror and conflict - some from Afghanistan. Under the proposed Nationality and Borders Bill, they will be: criminalised, threatened with removal, separated from their families, warehoused in unsuitable accommodation, have their asylum claims deemed ‘inadmissible’ and be prevented from feeling secure or safe.

This Anti Refugee Bill - will punish people and not protect them. It will directly increase destitution, homelessness and exploitation in our boroughs. It will lead to ever more dangerous routes for those seeking safety and will stop people who have fled violence and persecution from rebuilding their lives.

We are united in opposing this bill and call on our leaders in Greater Manchester to stand with us, and on the UK Government to scrap these harmful and divisive proposals.