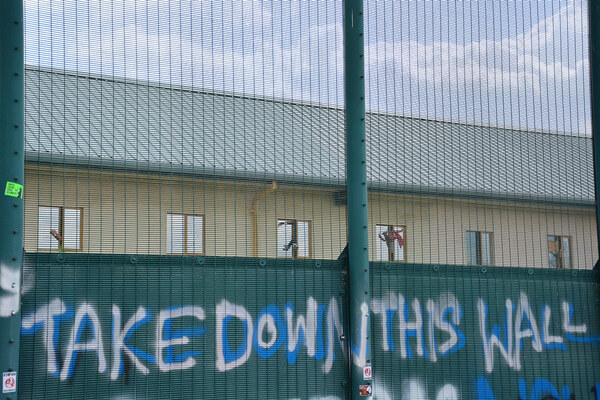 Yarl's Wood no longer to be used to detain women indefinitely.

We heard this week that Yarl's Wood was no longer going to be used to as a women's immigration removal centre. But sadly it wasn't all good news.
19 Aug 2020

For many years now,  people have campaigned for an end to indefinite detention. We are especially thankful for Women for Refugee Women who have led much of this work through the #SetHerFree campaign. A particular focus of the campaigning against indefinite detention has been on Yarl's Wood in Bedfordshire. Managed by Serco, this immigration removal centre has been the centre of too many stories of abuse and trauma in the centre, not too mention multiple damning inspection reports

We have seen first hand the impact of detention on the physical and mental health of our clients. It is hard for most of us to imagine the fear and anxiety of knowing we could be taken away and detained at any point, despite not having done anything wrong. The majority of Boaz clients who have been detained at Yarl's Wood and other similar centres have been released, and in many cases they have gone on to be granted leave to remain here in the UK, which shows the detention was at best unnecessary and sometimes unlawful. It is often stated by the Home Office that people who are detained are here illegally, but that is simply not the case. It is not illegal to claim asylum. Claiming asylum is a human right and it is only fair that people seeking protection are given the support and legal advice they need to make meaningful and appropriate claims.

In 2015, Rose and Grace, who were staying with Boaz at the time, participated in a large and peaceful demonstration at Yarl's Wood. They shared their experiences in a blog post at the time.

[The demonstration]was amazing! We went for a good cause - to shut down Yarl’s Wood. People came from all over the country, and many buses arrived. We were surprised how many people came, and we had some very good speakers: MPs, the actress Juliet Stevenson, Shami Chakrabarti.  And also [Richard Fuller] the local MP from Bedford.

The main subject that people were saying on Saturday was that women who have been subject to torture and domestic violence… they are already traumatised and then they are locked up in Yarl’s Wood indefinitely. It’s against their Human Rights. It’s not good for their well-being. You are supposed to lock up somebody who has committed a crime, but this is a vulnerable woman who is seeking help. Now you are damaging her more, even more by locking her in there - when they come out of there, they are as good as nothing. [The campaigners] rang a lady in detention and put her on speaker, then the lady spoke from inside saying that there was a lady who’s been inside for 1 year. She was walking when she arrived, and now she’s in a wheelchair. She’s secluded; you’re not allowed to go and see her, or to help her. So, what injustice is this? Even in jails they don’t do this. And all that when you’ve not even committed a crime. And they put you there indefinitely.

The atmosphere on Saturday was sad for some, but good for others. For me, I can say it was sad, and like mourning. To see the women inside there, it was so sad. Honestly. So sad to me.

We are in awe of the perseverance of women like Rose and Grace and many, many others who have been campaigning for years, and so when we heard news this week that the last few women had left Yarl's Wood, we had a brief moment of celebration. But it was sadly short lived as a colleague shared this article from the Guardian, which reports that the women are being housed in other immigration removal centres and Yarl's Wood itself is to be repurposed to house new arrivals including those who have recently crossed the Channel. We will continue to monitor this news and to stand with those calling for fairness and freedom for people seeking sanctuary.

The photo at the top of this story is credited and copyrighted to www.idjphotography.com and is labelled for noncommercial reuse.